COVIDISTAN AUSTRALIA
August 24/2021
The last and final page, added August 24/2021 in honour of all Australian Citizens who know the truth about fabricated epidemics and keep their heads clear in the face of the criminal war on humanity 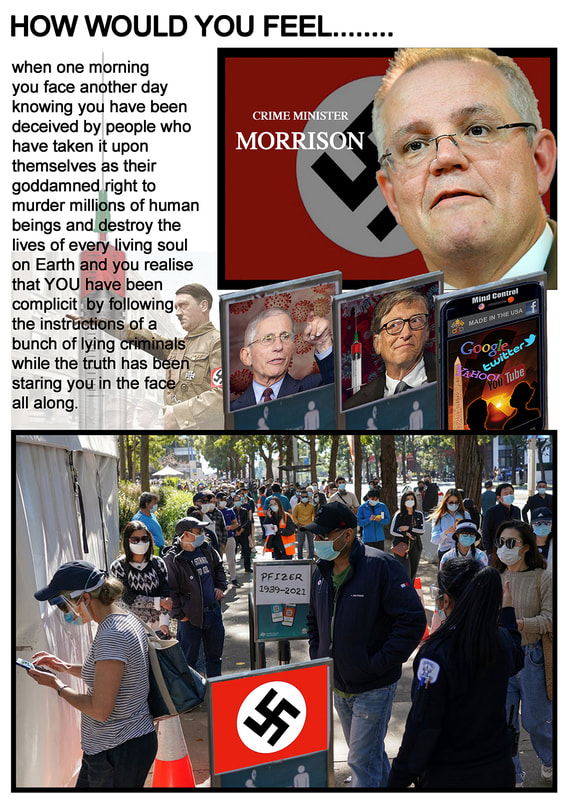 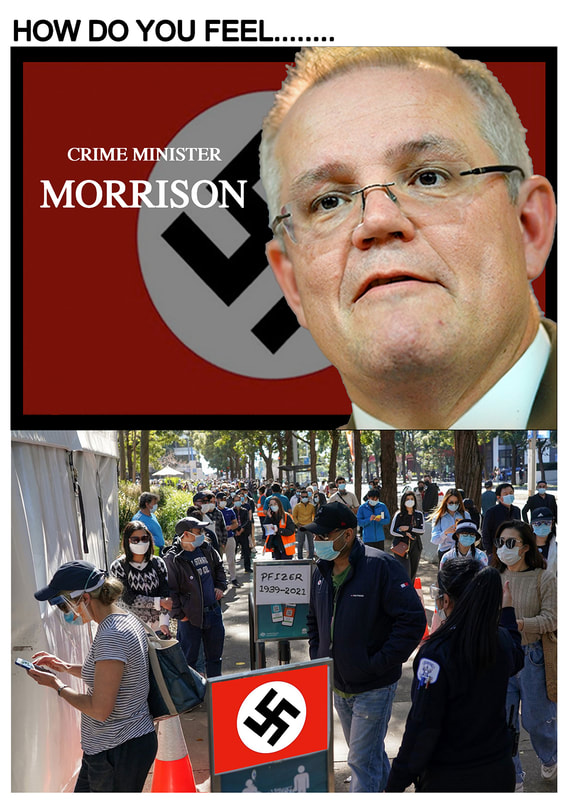 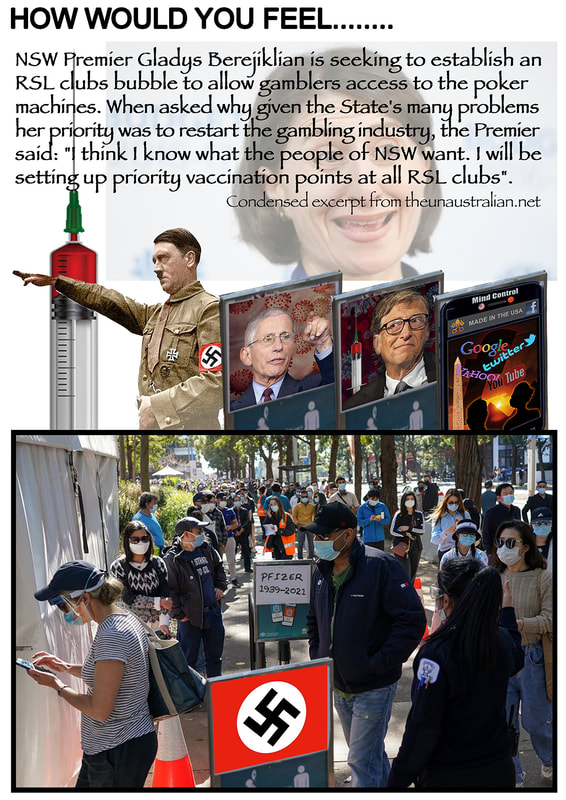 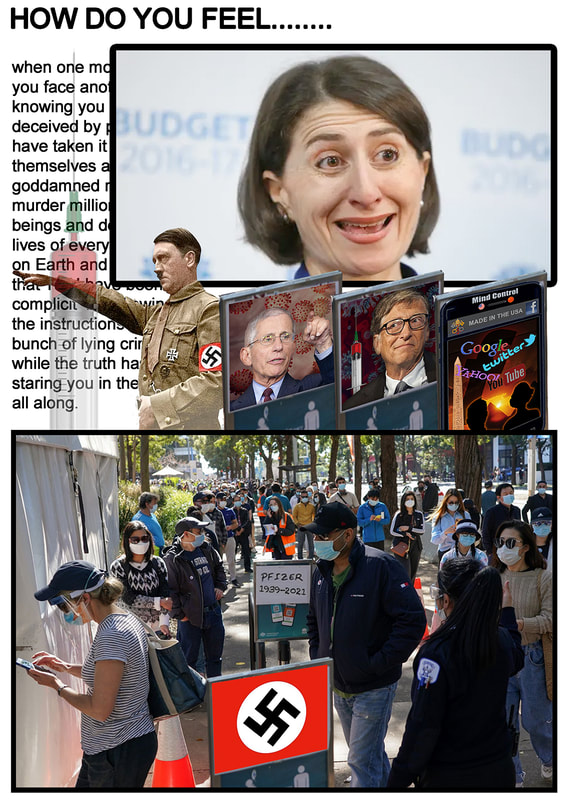 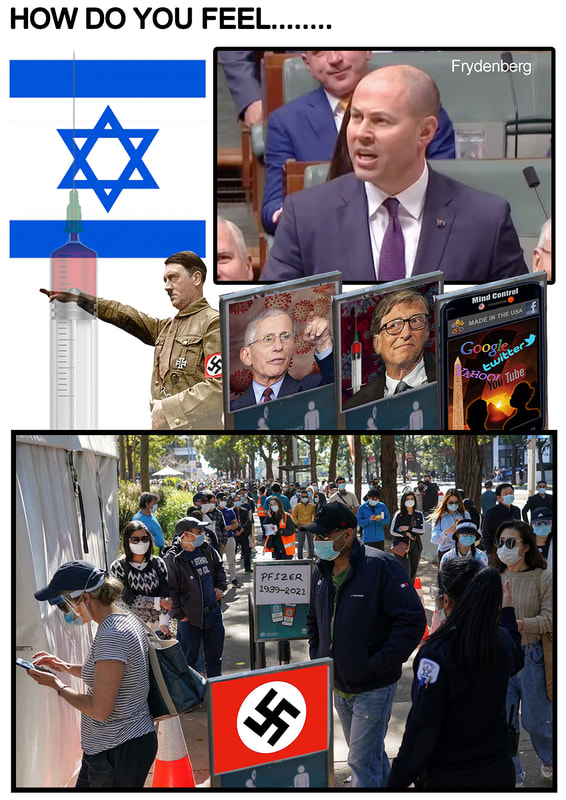 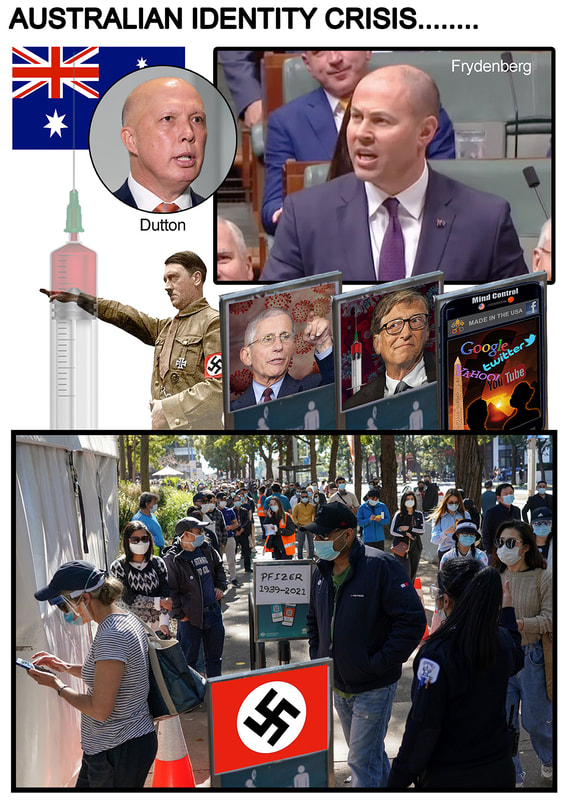 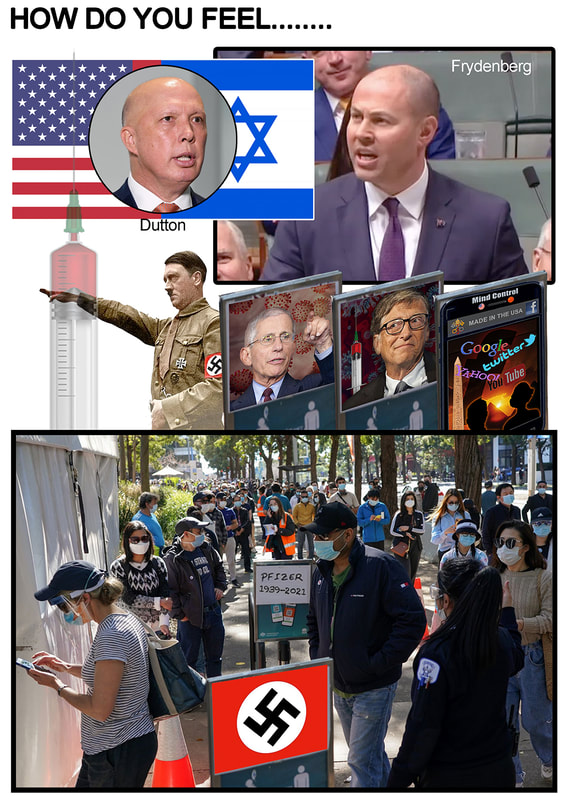 Identity Crisis - 2
Australians have been taken for a ride by a bogus government for over a period spanning more than a hundred years. The original constitution providing protection for every day citizens against coercion, extortion and unconstitutional intimidating laws created by corporations and people claiming to be the lawful government of country, state or municipality, has been turned on its head by what now, 2021 AD clearly shows to be the offspring of the 1939 Nazi regime.

To believe that the Australian (corporate) government is there for the well being of the population, or the country, or any Living Natural Species is naive and complacent. The evidence of the brutality of the Nazi regime is all around. It's 2021 AD - the Australian government is now seen as the most radical brutal police state in the world - all in the name of those in pursuit of global domination, people with a criminal obsession for power over anything and everything. 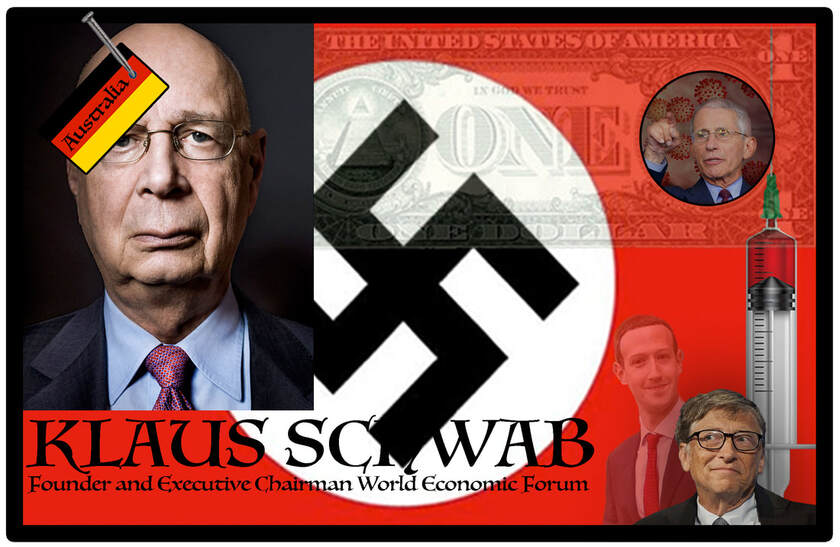 I have mentioned my February 1940 birth date on several occasions in this web site. Growing up the first 5 years of my life under the boots of the Nazi regime in Amsterdam, I remember things - I carry the pictures in a locked place in the top of my head - shall I call it my "brain" or my "mind"? I call it "the Attic". But that is another issue. My father was taken to Germany for forced labor in one of the Nazi war arsenal factories. But he came back after 2 years, unlike the fathers of some of my childhood friends. I didn't know of anything like "Peace", until 1945 when the war was over - apparently. I have maintained, at least since 2001, that the war people refer to as WWII, was none other but an ongoing war on humanity. Whether people have read my web site or anything on any page at all has remained unanswered.

I migrated to Australia in 1961 - on invitation of the Menzies government. I had no idea of the backstage politics then, nor did it register to take an interest in any of it, I was too busy tackling the hurdles of making a life. But it was inevitable that over the years my subconscious existence trickled over to the conscious existence which further generated through "my Life on Facebook". The futility of talking to thin air is a legacy of 11 years on Facebook until August 2020 when I deleted my account because I had enough of living inside the Nazi regime 24/7 naively thinking it would be the place to gather voices for change, peace, justice and sanity.

Now, at 81 years of age, deprived of exercising my life as a practicing multicultural guitarist by the deeds of the re-emerging Nazi regime implemented by its corporate affiliate posing as the Australian government, I question why I didn't know anything in 1961 before migrating to Australia. As it turned out however, I have learned a lot about the elite behind it all, the Dutch, the British, the Austrian, and many collaborating dictatorships. So it matters little where I live, or anyone for that matter, we're all caught up in a dysfunctional system on Planet Earth, operated by a ruthless slavery system - if you think you're not, then you need to learn about "infrastructure" - no matter what you do, you're part of it.

Covid-19 is none other than part of the agenda pursued to fulfill the pathetic, hideous illusions of a world dictated by weapons implemented force and applied violence. The world needs to be rid of the money spinners continuously plunging our world into wars, despair, death, destruction and suffering. An anti establishment revolution is not only inevitable, it is happening right now, and we all know it. Where it leads to is yet another unanswered question but the odds are............?  Bob Oort, September 14, 2021
The above three videos were added today September 14, 2021. Below are just 40 of the 149 videos made via Rebel News to this date, to give some idea of the tireless work by people like Avi Yemini who stand up for Justice for all. The word "rebel" stands for "standing up against a corrupt regime". We should all stand together to make this a safe (safe, not "safer") world for all to live, grow, and die of old age in, in Peace. Watch either video and you'll find all Rebel News videos right there in the right hand column. 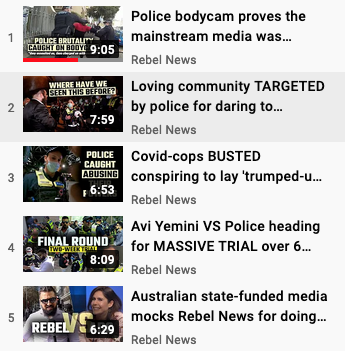 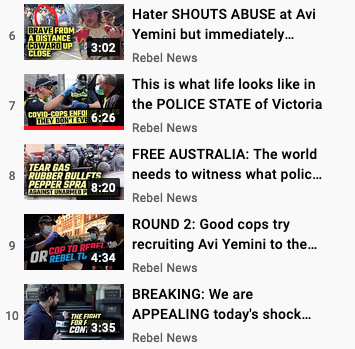 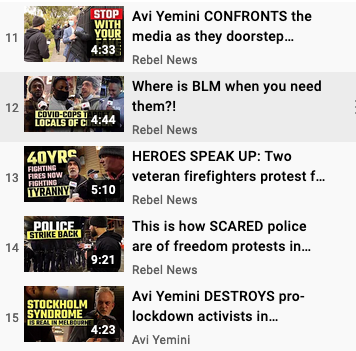 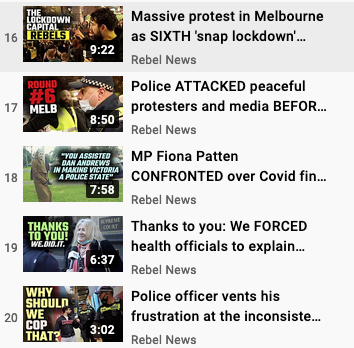 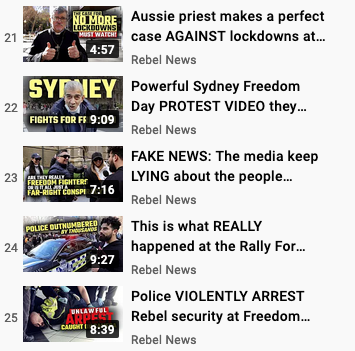 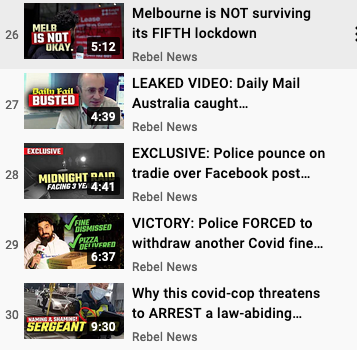 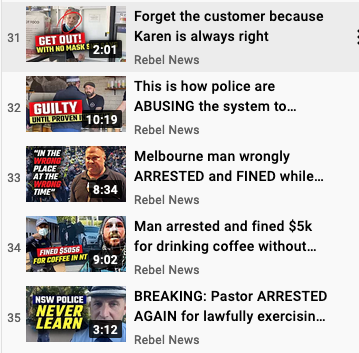 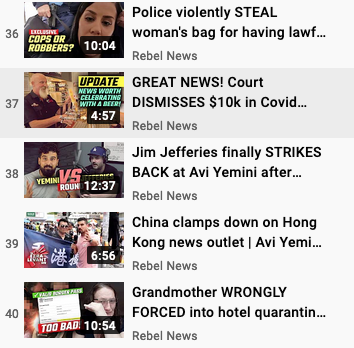 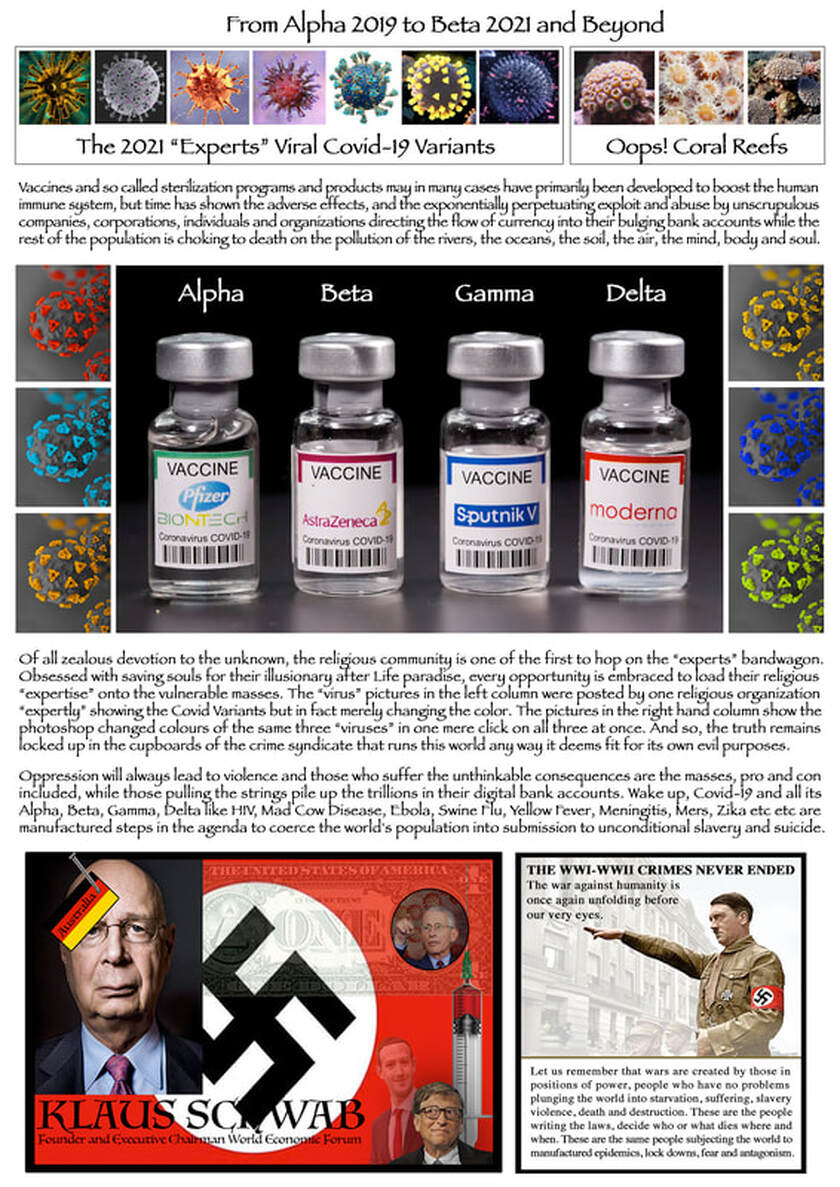 Comments on a Brazil Independence Day Pro-Anti-Bolsonaro Celebration/Demonstration video where an Australian journalist ex actress working for a German news broadcaster addresses the statistics on Covid-19 "cases" which in Brazil are said to amount to 600,000 deaths. All 6 pages in this web site on Covid-19 since January 2020 are obviously blowing in the wind. Reading through the comments, I came across this of many other unbelievably ignorant comments and couldn't resist adding my 10 cents worth:

Mrinal Kumar - Brazil is super power
David Wild - whatt!! I am from Portugal I hate brasil
Aa Adit - @David Wild:  Why are you hate Brazil?
kidd Pancham - Will be, Will be soon
Partha Pratim Ghose - @David Wild: that's awkward didn't Portugal colonise brazil ?
Bob Oort - @Partha Pratim Ghose:  Yup, and the roots to Brazilian choros come from Portugal. And we need to thank the African slaves for their part in the rhythms of Brazil, and of course the harmonies of native Brazil. So let's all dance to Samba and generate our natural attachment to Life, then, this covid nightmare will go away along with all the ignorance and siding with one criminal government or another. Saudações da Austrália.
⬇︎ VIDEO: An amazing piece of work, summing up how the 1960-1970s rock'n roll revolution fused the ticking time bomb we're now experiencing as the culmination of Agenda 21/30. Back then it looked like there could be hope for humanity but only because the fog was too thick to see through. Now, August 24/2021 things look a great deal different - the fog is clearing but at a cost of millions of short cut lives, unprecedented corruption, fake pandemics, political propaganda, and a 360 degree turn back to 1939. But it all looks like a little too late, like 6,000 plus years too late. The world could have been a beautiful place for mankind. But alas, we screwed up, real good.
⬇︎ VIDEO: Posted March 2015 at LEARN THE TRUTH
CIA Hippie Mind Control: Inside Laurel Canyon with Dave McGowan
ARTICLES:
HISTORY SHOWS US
that the political world is a totally separated, alienated entity from the mass population AND... every individual on this Planet. It consists of totally useless people whose only productivity is mass people enslavement, mass weapons manufacture, control over all aspects of technology and the corruption of the vulnerable, easily manipulated mindset of the general populace.

This society needs to rid itself of the perpetual political machine and all its branches, propagators and egocentric idealist, delusional, dead end control freak agendas. This world needs no more billion dollar war memorials only some people will ever see but the vast majority will not. This world needs no more trillion dollars war systems, no more truth side winding, no more band aid on band aid patches to cover up the infinite exponentially self perpetuating lies.

This world needs no more ruling elite class, royal, banker or industrialist. This world needs no more pyramids, no more pyramid systems of any kind, no more hierarchical governing with criminals at the top, subsistence struggling masses down the escalator and suffering everybody's rejects at the bottom and..... the consequent detrimental ecosystem destruction. This world needs Change, Sanity, Justice, Peace and true to Life Education. 2021 AD - the Homo Sapiens and Hybrid Sumerian Slave World has overstepped its limits on indoctrinated ignorance, crime, corruption, illusions, and toxic religious/political conditioning.

It doesn't take a zealously worshiped prophet to predict tomorrow, anyone with a functioning brain can see the long term consequences of the utter stupidity that underlies this world's society's behavior at any time of day past and present. Throw the mental crutches on the garbage dumps along with the billions of daily tonnes of non-recyclable, non biodegradable plastic, household commodities, useless tonnes of "literature", war arsenal and every other man made produce waste under the sun. You've been lied to all along and you're still being lied to, all the way to your grave. Get real, stop being a walking dead species, or send yourself off to another Planet, far, far away from here.
Bob Oort, August 28, 2021
Click Play ⬇︎ sit back and relax, good times are just around the corner
So you're "on Facebook, Twitter, what else". And you don't see how these "free public media" devices are driving the long established deep wedge between people even further. You don't see how you are herded into a grid the same as livestock is herded into grids by the agriculturalist e.g. animal exploitation and abuse industry, to be sold and transported to the butchers markets.

You have never lived through a war first hand, but you follow, in your own words, "the sheeple", on Facebook, Twitter, Youtube etc by posting your ignorant comments, just as these criminal corporate conglomerates have directed you to - but you don't know that, because all you know is what you choose to see on your mobile gadget, unaware that what you "choose" has been injected into your head by these conglomerates since the day you were born. So in your conditioned ignorance you follow the masses to their dead end, and yours, while shouting your stereotyped anti truth abuse at the minorities trying to stand up to the evil that you so willingly bow to.

To see any change for the well being of all living species in this screwed up world will most likely proof to be mere wishful thinking on the part of those few who believe in or wish for a better world to emerge from the ashes that have been smouldering for untold millennia, re-igniting the flames of violence again and again and again and none more so than today, 2021 AD (my own parrot fashion repeated phrase throughout this web site).

Oppression will always lead to violence and those who suffer the unthinkable consequences are the masses, pro and con included, while those pulling the strings pile up the trillions in their digital bank accounts. Wake up, Covid-19 and all its Alpha, Beta, Gamma, Delta like HIV, Mad Cow Disease, Ebola, Swine Flu, Yellow Fever, Meningitis, Mers, Zika etc etc are manufactured steps in the agenda to coerce the world's population into submission to unconditional slavery and suicide.

Vaccines and so called sterilization programs and products may in many cases have primarily been developed to boost the human immune system, but time has shown the adverse effects, and the exponentially perpetuating exploit and abuse by unscrupulous companies, corporations, individuals and organizations directing the flow of currency into their bulging bank accounts while the rest of the population is choking to death on the pollution of the rivers, the oceans, the soil, the air, the mind, body and soul. Bob Oort, September 24, 2021
Australia as with other countries has been dictated by the greatest criminal regime on Planet Earth since the late 1800s. The videos above and below say more than enough about the US "Criminal Machine".
Click Play ⬇︎
| Back to COVIDISTAN 4  | Proceed to 20 YEARS | Back to Top  | Site Map |